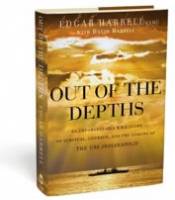 Like so many stories surrounding World War II where fact is stranger than fiction, Out of the Depths is a terrifying firsthand account of the sinking of the USS Indianapolis and the Navy cover-up that led to the bizarre court-martial and eventual exoneration of its captain. Marine survivor Edgar Harrell vividly describes the horrors of being plagued by sharks, hypothermia, severe dehydration and salt-water hallucinations, and the crew's heart wrenching struggle to survive the greatest catastrophe at sea in the history of the U.S. Navy—a truly riveting story of survival, political intrigue and faith in the providence of God.

Out of the depths have I cried unto thee, O Lord.
Lord, hear my voice:
let thine ears be attentive to the voice of my supplications.
Psalm 130:1-2 (KJV)