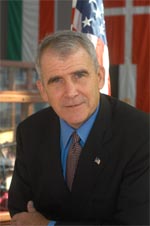 When that command was issued more than twenty centuries ago, it was to a group of fearful men, in peril on a dark and dangerous sea. No exhortation is more appropriate to this chronicle than those words of Jesus Christ.

On the night of 30 July 1945, just weeks before the end of World War II, the Japanese submarine I-58 launched a spread of torpedoes at the USS Indianapolis. Two of the “fish” found their mark. In less than 15 minutes the heavy cruiser, a battle-scarred veteran of the bloody campaigns for the Marianas, Iwo Jima and Okinawa went down without a trace – and without anyone but the survivors knowing the ship had been lost.

Some 900 of the ship’s 1,196-man crew – cold, oil-soaked, many with injuries – were suddenly alone in the shark infested waters of the Philippine Sea. For five horrific days after the sinking their numbers were cruelly depleted by shark attacks, salt-water poisoning, hypothermia and dehydration. When they were finally spotted and rescued, only 317 remained alive. This is their story, recounted by one of their own – Edgar Harrell - a young member of the U.S. Marine Ship’s Detachment. It is an unparalleled account of perseverance, courage, self-sacrifice and faith

It has been my great blessing to spend most of my life in the company of heroes. By “hero” I mean a person who has wittingly put himself in grave physical jeopardy for the benefit of another. Heroes are people who overcome evil by doing good at great personal risk. Through self-sacrifice, fortitude and action – whether they succeed or fail – heroes provide a moral and ethical framework – and inspiration – for the rest of us.

Unfortunately our modern definition of “hero” has been stretched to include all manner of people who do not warrant the title. The athlete who just set a new sports record isn’t a hero. Nor is the “daring” movie star or even the adventurer out to be the first solo climber to scale Mt. Everest. They may be brave – but they don’t meet the definition of a hero for whatever they achieve benefits only “self.”

Real heroes are selfless. My father was one. Many of the Marines with whom I was privileged to serve for nearly a quarter of a century were heroes. The firemen and police who rushed into the World Trade Center buildings and the Pentagon on 9-11 fit the description. Today, a good number of the young soldiers, sailors, airmen, Marines and Guardsmen that I cover in Iraq and Afghanistan for FOX News certainly meet the criteria. And Edgar Harrell, survivor of the catastrophic sinking of the USS Indianapolis, is a hero.

The true story Edgar Harrell and his son David recount in the pages that follow is far more than a tale of terror on the sea. Together, they have prepared a timely and relevant work - not just for the anniversary of a catastrophe – but for a new generation of Americans once again confronting an enemy that teaches young men not how to live – but how to die the right way. The kamikaze pilot who crashed his plane into the Indianapolis on March 31, 1945 differs little from the nineteen terrorists of 9-11 or the suicide car-bomber trying to kill U.S. soldiers and Marines today in Iraq. The brutal atrocities perpetrated in the “slaughter houses” of Fallujah are surreally similar to those committed by the Japanese against American prisoners of war – even to posing for cameras in the midst of the evil deed.

All of that – and much more – is in this book. It is a gripping tale of men tested beyond anything they thought possible – and how they responded with bravery, endurance and faith in the face of fear and overwhelming despair. Edgar Harrell is not the only hero in this book. But his faith is a testament to the Marine Corps motto: SemperFidelis – Latin for “Always Faithful.”